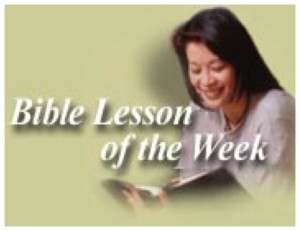 Please click here to view lesson in pdf format and to print:

“INTRODUCTION TO THE BOOK OF ROMANS”

This Letter to the Romans has changed the world.  Martin Luther, reading this Letter, began the Reformation.  The study of Romans is a life-long endeavor.  It is a living Book which will never become boring.  Thank you for beginning your study with me of the book of Romans.  I have studied it for sixty-eight years and have never gotten tired of reading it.  I have memorized chapters 6, 8, and 12 in French.  If you have a second language use a Bible in your language to do the memory work.  Here are your instructions:

1.  Read the first chapter of Romans through twice.

2.  Read through the lesson.  Notice some sentences have a word missing.  Think about the word that should be placed in the blank places.  I have left these blank places for the purpose of making you think what should be the exact word.  A synonym will be counted as a correct answer.

3.  After you have selected what you think should be the correct word, write it in the blank space.

4.  Send your lesson back and we will correct it for you.  Then we will mail your paper back to you with LESSON TWO.  Repeat doing this until you have completed the study.  The printed lessons are sent without charge.    Please mail to:  Home Bible Study Ministry, East Gate Broadcasting, 2837 Noyac Road, Sag Harbor, NY 11963.  When you finish the last lesson, we will send you a beautiful Certificate of Achievement of the Study of the Epistle to the Romans.

I. WHO THE WRITER IS

1. He is called Paul.  ________ in the Bible have meaning and this name is in contrast to his original name Saul.  Saul meant “the great one” (see I Samuel 9:3; 10:23)  Paul means “the little one.”  Once he had met the glorified Lord Jesus Christ on the Damascus road, his opinion of himself was totally changed.  From a proud, highly educated Jewish official, a Hebrew of the Hebrews, he became one who said of himself, “I am the least of the apostles and am not worthy to be called an apostle” (I Corinthians 15:9),  I am “one who is less than the least of all the saints” (Ephesians 3:8), I am “the chief of sinners” ( I Timothy 1:15).  Before he met Jesus he had caused the ___________ of many saints at Jerusalem and the confiscation of all their goods (Acts 26:10,11).  He never forgave himself for what he had done to Christ and the church.  If you have been brought up in a Christian home and you became a believer at an early age,  you do not have a wicked, sinful past to regret.  If you have such a past, you should never forget the pit from which you were dug.  Paul never forgot how he had ________ God’s people.  He did everything in his power to make up for it.  The closer he came to the  _______ of his life, the more he realized who he was.  Notice the progression, first the “least of the apostles,” later,” the least of all the saints,” finally, “the chief of _______________.” (I Timothy 1:15)

2. He calls himself “a ____________ of Jesus Christ.” (Romans 1:1)  The word, “servant” is actually “bond-slave” – a slave had no rights left to him except whatever his owner gave to him.  A slave could be murdered by his owner with impunity.  On the Isle of Capri, a Roman Caesar’s nephew told him he had never seen anyone killed.  Caesar called a soldier and ordered him to take one of the slaves nearby and throw him over the cliff.  As the slave went screaming to his death, Caesar said, “Now you have seen someone killed!”  But with Paul slavery was by __________.  In the Old Testament when a slave had served out his time, he had two choices: He could go free or he could renounce his freedom and become the slave of his owner forever.  If he did this he had to make   a public statement before the judges and then his ear was nailed for a moment to the door of the owner.   (Exodus 21:2-6)  The Psalmist uses this when He says, “Mine ears hast thou opened” (Psalm 40:6)

3. Called to be an apostle.  After his conversion at Damascus he spent three years with Christ in the Sinai wilderness. “But when God, who set me apart from birth and called me by His grace, was pleased to reveal His Son in me so that I might preach him among the Gentiles, I did not consult any man, nor did I go up  to Jerusalem to see those who were apostles before I was, but I went immediately into Arabia (Sinai) . . .” (Galatians 1:15-17); “The gospel that I preached is not something that man made up.  I did not receive it from any man, nor was I taught it; rather, I received it by revelation from Jesus Christ”  (Galatians 1:11,12)

4. “Set apart for the Gospel of God.”  Paul believed that God had chosen him for this mission.  His conversion  was an act of the sovereignty of God and the “Gospel of God” was given to him by direct revelation.  He was a man with one ____________ in life: To please Jesus Christ! (Galatians 2:20)

II. WHO THE SON OF GOD IS

III. WHY HE IS WRITING THIS LETTER TO THEM

1. He has “received grace and apostleship to call people from among all the Gentiles to the obedience that comes from faith” (Romans 1:5).  The legalists were constantly trying to turn Gentile believers back to the ______ of Moses (Galatians 3:13).  Paul in this letter does not reject the basic Law – the ten commandments – he tells them what will happen to them if they try to keep them (Romans chapter seven), and how “the righteousness of the law” can be fulfilled in them. (Romans chapter 8).

4. Since “all roads led to Rome,” Paul knew that this letter, the most detailed he had ever written, would find the widest distribution as believers would take back copies to their local churches in other cities.  He had no idea that this Letter to the Romans would be translated into thousands of languages and bless millions of people!

IV.  HE WENT TO ROME BECAUSE:

2. He was constantly remembering them “in my prayers  at all times: and I pray that now at last by God’s will the way may be opened for me to come to you” (Romans 1:10).

4. Rome was the largest city in the world.  Paul’s  was to minister both to the “Greeks and non-Greeks, both to the wise and the foolish.  That is why I am so eager to preach the gospel also to you who are at Rome”     (Romans 1:15).

5. He had wanted to come to Rome several times but each time he purposed to make the trip, he was prevented from coming.  He would eventually arrive in Rome, but not as a missionary, but as a ______________ facing imprisonment, trial and possibly execution. (Acts 28:16-31)

V. WHAT HIS MESSAGE WAS

1. Paul believed the gospel was “the ___________ of God for the salvation of everyone who believes, first for the Jew, then for the Gentile.” (Romans 1:16)  The message he would preach would be an invitation to anyone to come to Christ.  The decision to believe would rest upon those who heard the Gospel.  They would decide whether they were “worthy of _________________ life.”

3. He believed the Gospel was powerful.  He had seen its results in his missionary journeys as thousands had received the good news and had been converted and formed into churches.

VI. HOW THE LETTER GOT TO ROME FROM CORINTH

We are not told how the Letter got to Rome but in Romans 16:1,2 we learn that Phoebe, a successful _______________ woman, was going to Rome on a business trip.  This woman probably carried the Letter to Rome.  How often do we see women being first in the great important events of the Gospel!  What an honor for her to bring the Letter to the church at Rome.  Did she read the Letter while on the ship to Rome?  We do not know, but we know she was carrying in her care the most important Letter ever written by any man at any time.  A letter which would be world-changing in its effect.

VII.  THIS YEAR YOUR MEMORY ASSIGNMENTS ARE: memorize Romans 1:16, 3:23, 4:5; read chapter six and memorize 6:6,7; memorize the 39 verses of chapter 8, and Romans 12:1,2.   You will have no trouble memorizing if you read the passage out loud six times and then repeat the verses back to yourself.  Do a little each day and review each day.  Work on chapter 8 one paragraph at a time.  After you have learned the first paragraph, start on the next one and add it to the first.  This chapter will be the greatest blessing you have ever experienced!  You will not be tested on your memory work, but do it anyway!  Your memory is like your muscles.  “Use them or lose them”  Your memory is unlimited – use it and you will never lose it.  Begin your memory work today on Romans 1:16.  Let us know which verses you have memorized when your send in your lessons.  Thank you!

"That if you confess with your mouth Jesus as Lord, and believe in your heart that God raised Him from the dead, you will be saved; for with the heart a person believes, resulting in righteousness, and with the mouth he confesses, resulting in salvation."

"But to the one who does not work, but believes in Him who justifies the ungodly, his faith is credited as righteousness."

"For by grace you have been saved through faith; and that not of yourselves, it is the gift of God; not as a result of works, so that no one may boast."

"For the wages of sin is death, but the free gift of God is eternal life in Christ Jesus our Lord."
↑